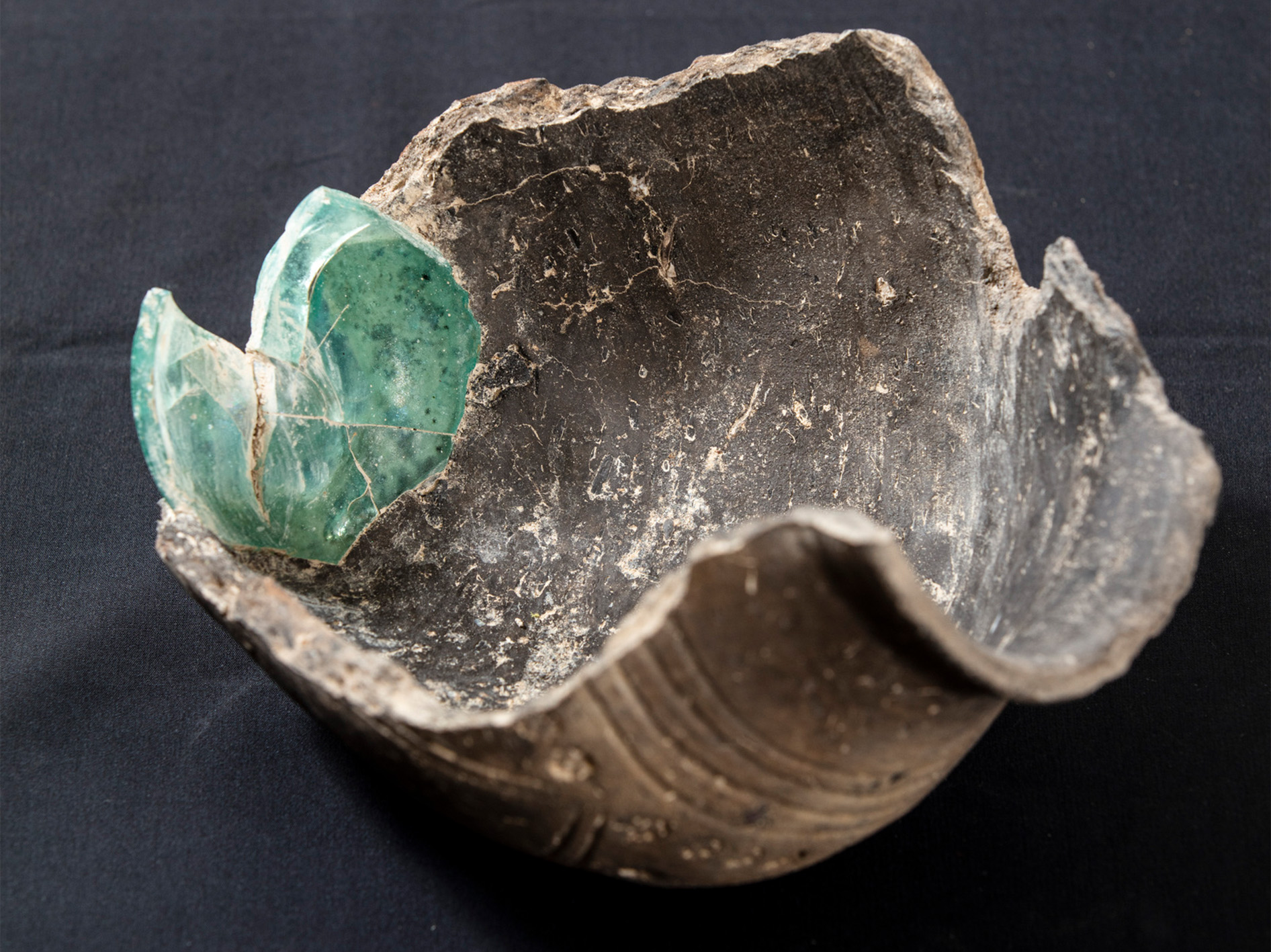 Archaeologists excavating a site along the new HS2 high-speed rail route in Wendover, Buckinghamshire, have unearthed a nationally important early Anglo-Saxon burial ground. Containing 138 graves with 141 inhumations and five cremation burials, it is the one of the largest Anglo-Saxon burial grounds ever discovered. It is also the richest, with almost 3/4s of the graves furnished with high-quality goods, including more than 2,000 beads, 89 brooches, 40 buckles, 51 knives, 15 spearheads and seven shield bosses.

Almost all of the skeletal remains were found with two brooches on the collarbone, used to fasten a garment at the shoulder. The brooches come in a variety of designs — silver coin brooches, gilt disc brooches, square-headed brooches. Other valuable grave goods include two cone beakers of the Kempston type with a raised horizontal trail decoration,

a footed pedestal bückelurn (meaning “bossed pot”) with three protruding horns and decorated with cross stamps. The cross-stamped decoration was a common Anglo-Saxon motif; the three horns are unique. Also unique is a ceramic window urn with reused Roman glass embedded into the bottom.

Some of the items uncovered could have been imported from across Europe, such as amber beads, and various metals and raw materials used to make the artefacts. Two glass cone beakers were uncovered intact, which are similar to vessels made in Northern France, although they were also making them in England at the time. The beakers, which would have been used for drinking liquids such as wine, may suggest the people there had access to fine beverages from abroad. The vessels have decorative trails in the glass and are comparable to the “Kempston” type cone beaker, uncovered in Bedfordshire in 1891, with one currently on display in the British Museum.

One individual, a female, was discovered with a vast array of goods, the quality of which suggest that she was of high-status amongst the buried population at the site. She was buried with a complete ornate glass bowl made of pale green glass, thought to be made around the turn of the 5thcentury, so could have been an heirloom from the Roman era. Other burial items included multiple rings made of copper alloy, a silver ‘zoomorphic’ ring, brooches, discs, iron belt fittings and objects made of ivory. […]

Archaeologists noted how the goods with each burial appeared to be tailored to each individual – suggesting the items would have held some relevance and significance to the deceased and the mourners at the graveside.  A number of grooming items were discovered, such as toiletry sets consisting of ear wax removers and toothpicks, tweezers, combs and even a cosmetic tube that could have contained a substance used as eyeliner or similar.

One warrior burial is a particular highlight. The young man, about 17-24 years old when he died, was found with a sharp iron spearhead embedded in his spine. This was probably what killed him. Osteological examination suggests the blow came from the front.

The grave goods excavated date to the 5th and 6th century, so very soon after the Roman withdrawal in 410 A.D. The period between the end of Roman rule and the establishment of Saxon rule in the late 6th century is

known as sub-Roman Britain. Contemporary written records from sub-Roman Britain consist of exactly three sources: two letters written by Saint Patrick in the 5th century (Confession and Letter to the Soldiers of Coroticus), and On the Ruin and Conquest of Britain, a fiery polemic written by Saint Gildas in the first half of the 6th century. There are gaps in the archaeological record of this period as well, so the skeletal remains and grave goods are invaluable testaments to the lives and deaths of the Anglo-Saxon elite of sub-Roman Britain.