How women from Rus influenced names in Medieval Europe 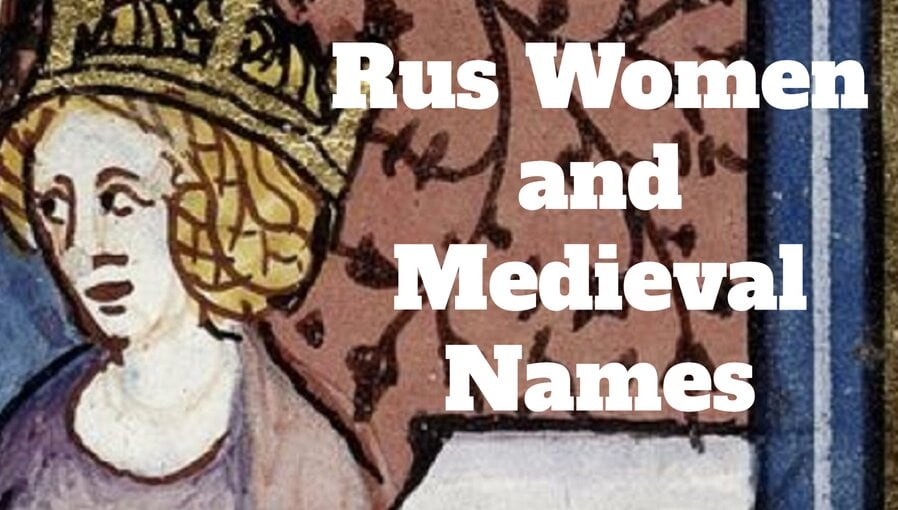 Several kings in medieval Europe were named Philip and Valdemar. Those names may not have existed if not for Rus women.

It is a common idea that mothers name their children. The idea being that women raise children and thus carry on the incredibly important act of providing a name for the child that they have borne as perhaps the first act of the child’s life. Women as name-givers may be an outdated, gendered, even sexist, idea in our modern twenty-first century times but it still persists. And thus, when I speak with my history classes about medieval women naming their children after their own natal relatives (rather than their marital relatives), the students aren’t surprised in the least. The present article takes as a foundational principle that women were likely to name their children and develops that to show that women from the medieval kingdom of Rus, as well as women from elsewhere within that kingdom, brought names from their own birth families to their marital families. Those names may have begun life as injections of foreign culture, but ended up as traditional, local names, after not very long. All of which demonstrate not just the importance of medieval women as culture bearers, but the interconnectivity of medieval Europe.

In the middle of the eleventh century, King Iaroslav of Rus and his wife Queen Ingigerd married their children to the royalty of Europe. One marriage in particular is often noted as standing out amongst those many and that is the betrothal and later marriage of their daughter Anna to King Henry Capet of France. French sources, written in Latin of course, detail the sending of a delegation to Rus to negotiate the marriage and their return with Henry’s future bride. The wedding was a grand affair and soon after led to the birth of a son, the first of Henry’s rule, despite two previous marriages. This is where we begin to see Rusian influence at work.

In the Capetian royal family there was a tradition of royal names. Men were typically named Hugh or Robert if they were the first-born son, and we can see a sequence of Roberts and Hughs over the late tenth and early eleventh century. Henry himself was a second son, thus his derivation from that model. But the name given to Anna and Henry’s first-born son was Philip. This name appears nowhere in previous Capetian name-giving and was rare in western Europe at this time. Though there had been a Roman emperor of the second century with the name, who was perhaps a secret Christian, the name had not caught on widely. In the Constantinopolitan world, however, the name maintained a strong presence and St. Philip, in particular, was well known. Thus, it has been widely surmised the introduction of the name “Philip” into the Capetian line, and thus into French history, comes from the actions of Anna, the Rusian princess and queen of France, who later became Philip’s regent and even signed documents with him as “rex.” One of her most interesting documents highlights the unique blend of cultures featured here and that is her use of Cyrillic script to write the Latin phrase, “Anna Regina.”

The second example of naming influence by Rusian women comes from Denmark where there is a fascinating pair of marriages arranged in the early twelfth century. At that time, Mstislav / Harald Volodimerich (discussed below) arranged marriages for two of his daughters to a Norwegian king and a Danish prince. The Danish prince was Knud Lavard and while he never became king of Denmark, he ruled an area of the Abodrite Slavs along the Baltic and worked with Duke Henry the Lion of Saxony as well. Knud and his wife Ingeborg had numerous daughters but initially no sons.

The naming of their only son comes as part of a formative story in the history of Denmark. Knud Lavard was called to a meeting by his cousin Magnus Nielsson. Magnus was the son of King Niels and there is much speculation that Niels and his wife (coincidentally Ingeborg’s maternal aunt) wanted their son Magnus to become the next king of Denmark, rather than Knud Lavard. Ingeborg was worried about her husband’s meeting, and she told him that she did not want him to go and she had had a dream about it which indicated that he would be killed. Nevertheless, Knud Lavard attended the meeting and was killed. After his death, Ingeborg bore their last child, a son, and she named the boy Valdemar, a vowel-shifted version of her grandfather’s name – Volodimer.

The epilogue to this story is even more interesting as Ingeborg and her sister Malfrid the queen of Norway would work together to ensure Valdemar’s eventual succession to the throne of Denmark through a series of marriages, intrigues, and battles. All of which brought to the throne the Rusian-named King Valdemar.

We have a similar situation in Rus where women from elsewhere in Europe married into the ruling family of Rus and left their mark with their names.

The first example comes in the middle of the eleventh century when Iaroslav and Ingigerd’s son Vsevolod married a Byzantine princess. The woman’s identity is largely unknown, though many have speculated on who she may have been and her relation to the emperor. The Byzantine emperor at the time was Constantine IX Monomachos, and we have evidence that this woman was from his larger family, though was not his daughter. The evidence comes not from anything about her, but from her son’s nickname – Monomakh. This nickname was clearly an allusion to the Monomachos clan, and given the connection of the marriage, it has been widely assumed that the mother was the source of this nickname. Her Byzantine roots became a way for her son, named Volodimer in Rus, to emphasize his connections to a foreign power, but also to claim some additional grandeur for himself via his mother’s origins. The nickname was so well known that it was even placed on his seal.

The second example from Rus actually comes from Volodimer Monomakh’s son. Monomakh married Gyda, the daughter of Harold Godwinsson the last Anglo-Saxon king of England who was killed at the Battle of Hastings in 1066 by Duke William the Bastard of Normandy. It may have potentially been uncomfortable for Gyda in Rus, as while she was taken in and became part of the family, another branch of the family, her husband’s aunt, was married to the Norwegian king Harald Hardraada who had also invaded England in 1066. Though Harold Godwinsson had defeated Hardraada at Stamford Bridge, the attack by the Norwegian may have been one of the factors that allowed for the success of the Normans later that year.

Nevertheless, Gyda found a home in Rus, married Volodimer, and had multiple children. The eldest male of those was named Mstislav. But Mstislav in his many interactions with the Scandinavian world, including his own marriage to a Swedish princess, was always referred to as “Harald.” The Scandinavian sources’ use of Harald for Mstislav indicates that he, like his father before him, had a nickname derived from his mother’s family. In this case, the name was his maternal grandfather’s and was an important, and familiar, name in Scandinavia as well. Thus, we see Mstislav / Harald quite active in Scandinavian, as well as Rusian, affairs. Including marrying his and Christina’s daughters into the royal families of Denmark and Norway, as discussed above.

Though just a few of many possible examples, these four demonstrate the ability of women to name their children with names from their own (natal) family, as well as the influence of these women as culture bearers acting as change agents within their marital families and their new kingdoms.

Christian Raffensperger is the Kenneth E. Wray Chair in the Humanities at Wittenberg University, and currently is the Archie K. Davis Fellow at the National Humanities Center. His work present Rus not as a principality or a collection of principalities but as one of the realms of medieval Europe. Click here to view his university webpage.