What Honour meant to the French and the Scots 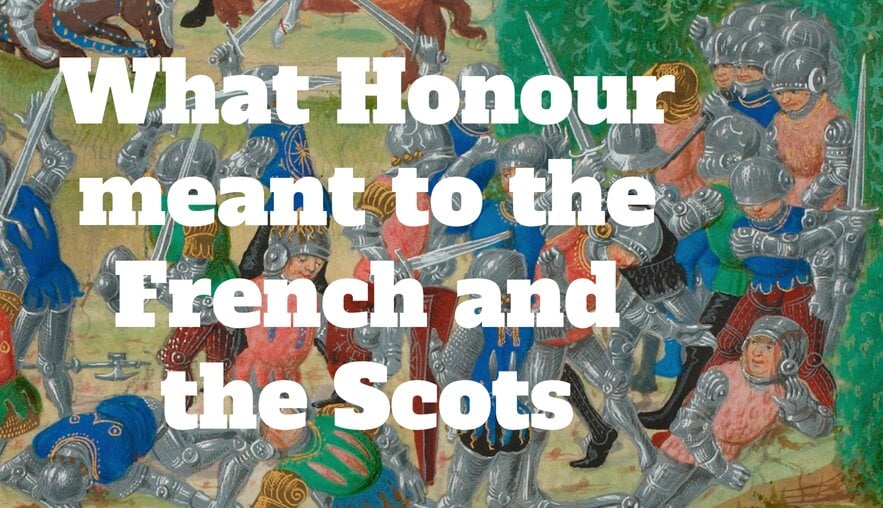 Ideas about honour and chivalry could be very different in the medieval world, as this example written by Froissart shows.

Medieval histories often contain what seem to us digressions, depending on the interests of the writers and their audience. Jean Froissart (1338-1410), who was an energetic and ambitious historian, wrote quite a few digressions. He not only composed the most detailed account of the first half of the Hundred Years War, emphasizing the heroic achievements of those who fought in it, but included many passages illustrating the cultural geography and even sociology of the countries involved in the wars.

We have a lot to learn from Froissart’s digressions. One of the best is the lively description of the French expedition to Scotland, an exotic and little-known country to continentals. Not only does the chronicler describe the country, he provides some insight into the concept of honour – or perhaps two concepts, as illustrated by his account of the ill-fated alliance of the mid-14th century.

It was not unusual for the Scots and French to work together against the English. England was a threat to each of them, before during and after the Hundred Years’ War. During the 1350s, the French court was looking for an advantage and decided that it would be worthwhile to send an expedition to Scotland.

The initial cooperation between the allies was promising, thanks to the diplomatic skill of Sir Geoffroi de Charny. But when the French force arrived in Edinburgh, conditions were not what they expected. The king was not in Edinburgh, but rather busy attempting to exercise his authority in the north. The French leaders instead were dealing with a small group of Scots who alone were enthusiastic about the alliance.. Froissart explains:

They … arrived at Edinburgh, the capital of Scotland, where the king chiefly resides when he is in that part of the country. The earls of Douglas and Moray, from the information they had received, were waiting for them in Edinburgh and as soon as they came, hastened to meet them at the harbour, and received them most amicably, bidding them welcome to their country….

The [French] lords and their men lodged themselves as well as they could in Edinburgh, and those who could not lodge there were quartered in the different villages thereabout. Edinburgh, notwithstanding it is the residence of the king, and is the Paris of Scotland, is not such a town as Tournay or Valenciennes; for there are not in the whole town four thousand houses. …

News was soon spread through Scotland, that a large body of men at arms from France had arrived in the country. Some began to murmur and say, “What devil has brought them here? or who has sent for them? Cannot we carry on our wars with England without their assistance? … Let them be told to return again, for we are sufficiently numerous in Scotland to fight our own quarrels, and do not want their company. …. If the English do burn our houses, what consequence is it to us? We can rebuild them cheap enough, for we only require three days to do so, provided we have five or six poles and boughs to cover them.”

Such was the conversation of the Scots on the arrival of the French: they did not esteem them, but hated them in their hearts, and abused them with their tongues as much as they could, like the rude and worthless people as they are.

Froissart himself had more to say:

In Scotland you will never find a man of worth: they are like savages, who wish not to be acquainted with any one, and are too envious of the good fortune of others, and suspicious of losing any thing themselves, for their country is very poor. When these barons and knights of France, who had been used to handsome hotels, ornamented apartments, and castles with good soft beds to repose on, saw themselves in such poverty, they began to laugh, and to say before the admiral [Jean de Vienne], “What could have brought us hither? We have never known till now what was meant by poverty and hard living… [The admiral said] “Take in good humour whatever you can get. You cannot always be at Paris, Dijon, Beaune or Châlons. it is necessary for those who wish to live with honour  in this world to endure good and evil.”

Admiral de Vienne did his best to bridge the gap between the allies, with little luck:

He made as much acquaintance as he could within the Scottish barons and knights: but he was visited by so very few it is not worth speaking of; for, as I have said before, there is not much honour there, and they are people difficult to be acquainted with. The earls of Douglas and Moray were the principal visitants to the lords of France. These two lords paid them more attention than all the rest of Scotland.

The French ended up with a poor view of their allies:

The Scots are like savages, who wish not to be acquainted with any one, and are too envious of the good fortune of others, and suspicious of losing any thing themselves, for their country is very poor.

There were Scottish earls and lords in Froissart’s account, but also the judgment that “you will never find a man of worth [among them].” Nor do we see any attachment to what the French called “honour.”

What was this honour? In the most general sense, it meant respect, reputation and status. Yes those of worth had honour (reputation), and were given honour (respect) by those who recognized their worth. In a military situation honour was military effectiveness, as well as the success that came to those who learned all sorts of military arms so that “they always knew the most honourable course of action.”

But there were other aspects of honour. In describing the faults of the Scots, Froissart links honour with generosity, hospitality and rich living. The reluctance of Scots to associate with the French lords was in the eyes of the French a lack of worth or honour. Frenchmen, who laughed at their quarters, men who were used to ornamented apartments even on campaign, were no doubt quite open in their contempt for the poor accommodations they were offered, and those who offered them.

French opinions of the lack of worth or honour among the Scots are clear.  Should we accept this evaluation of Scottish honour? Let’s return to the passage where Froissart speaks for the Scots who rejected their king’s alliance:

We can be shocked at the pride shown by these Scots, their willingness to live in huts if it enabled them to defeat the English, but we should also consider that the Scots (whose words were written by the French-speaking Froissart) were expressing their own understanding of honour, or perhaps military effectiveness. The actions of these Scots (as described by their unsympathetic allies) were motivated by a difficult situation – the presence of foreign allies and enemies. In response the Scots claimed to be willing to sacrifice wealth and comfort, not to mention to hold onto their independence and good name in the eyes of many foreigners.

It is easy to see universal elements in later medieval writings about chivalry. Treatises and sermons usually were written to encourage men-at-arms (any sort of armed man) to rely on God and be conscious of their duty as warriors. Those who wanted to reform their fellows spoke in terms from the Bible, or from the virtues. But there must always have been different “regional” understandings of virtue, honour, and chivalry. That is what Froissart’s Scots remind us of.

Steven Muhlberger, before he retired from Nipissing University, studied and taught Late Antiquity, the history of democracy, Islamic history, and chivalry. His most recent scholarly works include The Chronicle of the Good Duke Louis II Bourbon published by Freelance Academy Press.